No other airline has done it like Pan Am: it ushered in the golden age of travel and brought flying to the masses.

Pan Am: how one airline defined the golden age of travel

The world’s first known commercial flight took place in 1914. It was a 27-kilometer journey in Florida from St. Petersburg to Tampa. These days, a distance of 30 kilometers is better driven (or even jogged). Not surprisingly, in the past 108 years domestic flying in the US has changed dramatically.

If the forefathers of flight could glimpse what flying domestic in the US has been like over the last couple of years, they would be shocked, not least because, in 2021, unruly behavior onboard had become so extreme that US president Joe Biden tasked the Justice Department to deal with the spiraling cases of unruly passengers.

But flying hasn’t always been a disenchanting experience. Here, AeroTime looks at one of the most important legacies of North American aviation: the golden age of travel.

If there’s an airline synonymous with the glamorous age of travel, it’s Pan American World Airways, originally founded as Pan American Airways and popularly known as Pan Am.

For most of its lifetime, Pan Am was the principal international air carrier of the United States. Not only was it the first airline in the world to offer the first regularly scheduled round-the-world service, it also took flying to a stylish level most associated with the golden age of travel.

In 1939, Pan Am introduced a new seaplane that was even bigger than the Martin M-130 Clipper. The Boeing 314 was designed for Pan Am routes across the Atlantic and the Pacific oceans. It was the largest airliner of its day, with a cabin nearly as wide as the Boeing 747, which was introduced 30 years later.

A Pan Am brochure in the 1940s image credit: National Air and Space Museum, Smithsonian Institution

As the Clippers were used for lengthy transoceanic flights, they offered luxury and comfort. A San Francisco to Honolulu flight in 1940, just one of the Pan Am Clippers routes, had a flight duration of 19 hours. The seats in the Clippers could be converted into sleeping bunks for overnight ‘accommodation’, it had a lounge and dining area, and the galleys were crewed by chefs from four-star hotels.

One of the highlights of the Pan Am Clippers were the sleeping quarters as they were more spacious than previous Clippers. The National Air and Space Museum recorded an observation made by someone about the Boeing 314’s sleeping quarters: "One can shed his clothing without doing backbends and wrestler's bridges."

By the 1950s, Pan Am, then known widely as Pan American World Airways, had established itself not just as a luxurious airline, but also the most modern and fastest way to fly commercially, reaching farther destinations with the latest aircraft models.

Pan Am purchased 20 of the Boeing 707 Jet Clipper. Image source: The Pan Am Historical Foundation

Powered by Pratt and Whitney JT3C Turbojet engines, the Boeing 707 drastically reduced flying time. It was constantly used for transatlantic flights to Europe. 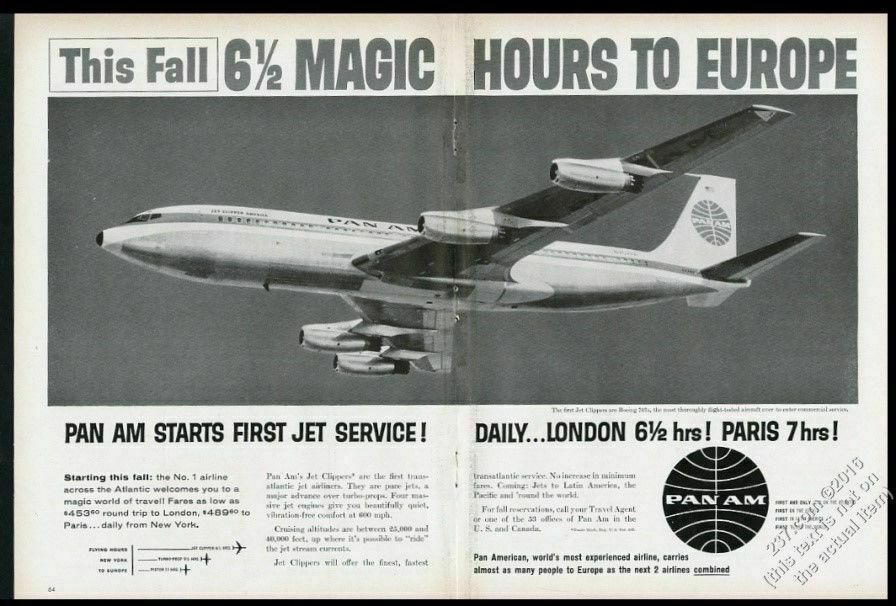 As passengers now spent less than half the previous time on flights, Pan Am concentrated on its menus, making sure that every PanAm flight had a luxurious dining experience. Pan Am had plenty of transatlantic flights, and the airline partnered with legendary Parisian restaurant Maxim’s to cater its in-flight meals.

For many years, Maxim's chefs prepared all of Pan Am's Atlantic catering. Meals were flash frozen and stored at different locations.

By the 1960s, Pan Am had well and truly paved the way in the golden age of travel. In the history of commercial flights, this is the era that equated flying with a luxurious, comfortable, and glamorous experience.

In stark contrast to 2022, where being a flight attendant is sometimes extremely challenging, being a Pan Am stewardess (as the job was called back then) in the 60s was a glamorous job, envied by many.

“The whole wide, wonderful world is your ‘place of business’, and your days are filled with the romance of far-away, exotic lands…you enjoy the prestige of a profession that is widely – and deservedly – acclaimed as glamorous,” a 1967 Pan Am ad said.

A number of former Pan Am flight attendants have given accounts of what work life was really like in the mid-20th century. While some acknowledged the “good life” that came with the job such as being based in Hong Kong, living in a high-rise flat with a personal cook, and bar-hopping in different hotels, others have described what happened behind the chic facade. Job stipulations included remaining single, unmarried, and maintaining a certain weight.

Pan Am stewardesses in the 1960s have inspired TV shows, movies, and represented a majestic era of travel. Image source: Amazon

It may not be as overt, but more than 50 years later, some of Pan Am’s exacting standards in selecting and keeping cabin crew are thought to be required today.

On January 22, 1970, Pan Am ushered in the age of wide-body aircraft with its first B747 flight  from New York to London.

A personal account from a young passenger on board the inaugural flight recalled: “There are three things that are burned into my memory. First, it was very cold. Second the media circus, everyone trying to get that perfect picture. Last, the massive size of the airplane. I had flown on the 707 before and that was a Tonka toy compared to The Queen of The Sky.”

image source: Everything Pan Am

Touted as “the plane with all the room in the world”, it was the 747’s sheer size and capacity that allowed Pan Am to make fares more accessible.

As many people fondly remember this era, in 2014 the Pan Am Experience was born, a fine-dining experience in Hollywood, Los Angeles. In this custom-built environment, people can relive the grandeur of Pan Am dining.

The Pan Am experience. Image credit: Pan Am Experience

While the mock-up cabin will not take to the skies, the interiors have been painstakingly built to replicate the Pan Am 747 Jet Clipper. They even have a historian/trainer who worked as a purser for Pan Am from 1970 to 1991 to ensure authenticity.

Now faced with an increased number of rivals, Pan Am had to reduce costs in order to be more competitive. In the 1980s, the airline marketed its business class (called the Clipper Class), and economy class.

It was in this decade that Pan Am’s look and image changed. From the luxurious trademark style of its cabins and staff uniforms, Pan Am now reflected a more modern and practical vibe.

Pan Am marketed business class in the 1980s. Image credit: Everything Pan Am

Pan Am economy class in the 1980s. Image credit: Everything Pan Am

The airline continued to suffer financially and, on December 4, 1991, Pan Am flew its final flight after almost 65 years of operations.

All good things come to an end, even for the world’s most experienced airline.

Pan Am’s glory may not have lived forever but no other airline in aviation history has achieved the same things: it took the luxury of travel to its zenith, connected people to destinations worldwide, and brought travel to the masses.

Pan Am’s influence can be seen in many different airlines and in the way people travel today. In tribute to the airline’s legacy, here’s a clip of a PanAm service to Europe in the 1950s:

A roadmap to the Mexican aviation market

The global aviation market is beginning to recover from the COVID-19 pandemic. But what does aviation in Mexico look lik...

High oil prices: what will this mean for US airline passengers this summer?

Rising fuel prices may be another hurdle on the path to recovery for airlines ahead of the summer season. ...

One of the last airmail pilots in America shares his story

“Flying in Alaska is unique.” Pilot Gedas shares his story of flying to some of the most remote areas in the...

Singapore Airlines rebuilds US network by bringing A380 back to JFK

Singapore Airlines is rebuilding its US network, bringing the A380 back to JFK and restoring non-stop flights from EWR...

Indonesia threatens to halt Airbus orders over spat with EU

Thank you for subscribing!
Please check your email and confirm subscription.