On this day 45 years ago, two Boeing 747 jets collided on the runway in Tenerife, killing 583 people in the deadliest aviation disaster in history.

On this day 45 years ago, on the afternoon of March 27, 1977, a terrorist group detonated a bomb in a florist’s shop in the terminal of Gran Canaria Airport, Canary Islands. The explosion injured eight people and, following the incident, the airport was closed to arriving aircraft while the terminal was secured.

The bombing set in motion a series of events which would, by the end of the day, lead to the deadliest aviation disaster in history, involving the collision of two Boeing 747 aircraft and killing 583 people.

KLM Flight 4805 was a Boeing 747-200 en route to Gran Canaria from Amsterdam. On the flight deck was Captain Jacob Veldhuyzen van Zantan, KLM’s chief flight instructor, along with first officer Klaas Meurs and flight engineer Willem Schreuder. The KLM jet was loaded with 235 passengers and 14 crew. 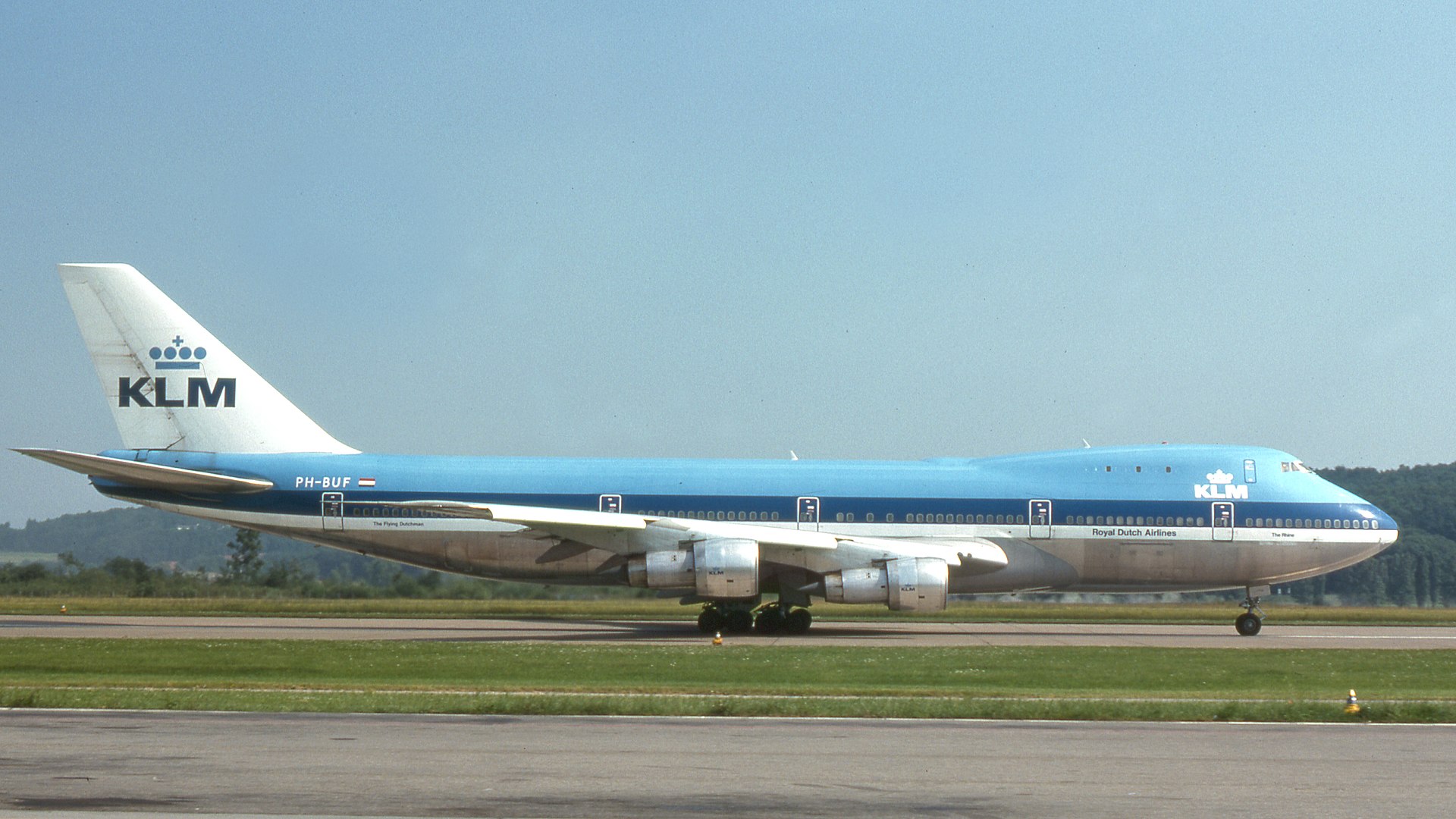 Pan Am Flight 1736, a Boeing 747-100, had originated from Los Angeles International Airport with an intermediate stop at New York JFK while en route to Gran Canaria. The flight crew comprised Captain Victor Grubbs, first officer Robert Bragg as well as flight engineer George Warns. The aircraft, named Clipper Victor, was the inaugural Boeing 747, and was carrying 380 passengers and 16 crew.

On learning of the closure of Gran Canaria airport, the KLM and Pan Am flight crews diverted to Los Rhodeos Airport (now named Tenerife North Airport) on the neighboring island of Tenerife. The Dutch Boeing 747 landed at 1338 local time with the Pan Am Boeing 747 landing at 1415.

As a small regional airport, Los Rhodeos Airport was not accustomed to handling the volume of traffic now heading its way. The airport had only one runway with a single taxiway running parallel. Owing to the many diverted aircraft, the apron was full, and aircraft had to park on the taxiway, making it unavailable for taxiing. Departing aircraft would therefore have to perform a backtrack - taxiing the length of the runway before turning 180º to take off in the opposite direction.

When Las Palmas Airport reopened, the Pam Am crew were ready to depart almost immediately, but were unable to maneuver past the KLM 747 which was parked in front and blocking the taxiway. The KLM crew had also decided to refuel the aircraft, and the refueling of 55,500 liters of jet fuel took around 30 minutes to complete.

The weather at this point began to close in, with dense clouds rolling over the runway. Visibility decreased from 500m (1600ft) down to less than 100m (330ft). The airport had no taxiway markings or operational runway lighting, adding to the challenging conditions.

As KLM reached the end of the runway and completed its 180º turn, the captain began to advance the throttles for take-off, until his first officer advised that they had not yet been given take-off clearance. The KLM crew contacted the control tower, confirming they were ready and waiting for ATC clearance, and then the controller gave KLM its departure clearance and told them to stand by for take-off clearance.

The KLM plane was now head-on with the Pan Am 747 which was still taxiing towards the third exit, and the Pan Am crew were instructed to inform the tower when they were clear from the runway.

The KLM captain declared “we’re going” and advanced the throttles to the take-off setting. The Pan Am crew, who initially were unsure whether the controller had said first or third exit, were now faced with such poor visibility that they overshot the third exit which would have required the enormous 747 to perform a 148º turn. The crew continued taxiing to the fourth exit which only required a 35º turn off the runway.

Unfortunately, as the controller reiterated to KLM to “stand by for take-off, I will call you”, the Pan Am crew simultaneously called to say “we’re still taxiing down the runway”, and so neither transmissions were heard on the KLM flight deck. Due to the dense cloud, neither the controller nor either aircraft could see each other, and the airport did not have ground radar to determine where both aircraft were.

ATC acknowledged Pan Am again, informing them “report the runway clear” to which Pan Am crew replied “we’ll report when we’re clear”. But the KLM aircraft had already begun its take off roll. Despite the flight engineer raising the question “is he not clear, that Pan American?”, the captain replied with “oh, yes” and continued.

The crew of Pam Am Flight 1736 saw the enormous KLM 747 aircraft accelerating towards them with around nine seconds until impact. They immediately applied full power and sharply turned left in an attempt to clear the runway. But by now the collision was all but certain.

The KLM crew, seeing the Pan Am plane with 100m to impact and traveling at 260km/hr, applied full back pressure, prematurely rotating and causing a 22m tail strike. The aircraft, which was full of fuel, collided with the Pan Am 747, ripping the American aircraft apart. The KLM 747 remained airborne momentarily before stalling and crashing further down the runway.

A total of 234 passengers and 14 crew died on the KLM flight. The extra fuel on board added to the severity of the fire engulfing the aircraft and no one was able to escape. A single passenger, Robina van Lanschot, had elected to remain in Tenerife where she lived rather than re-board the aircraft and so she was the sole survivor of KLM Flight 4805.

On the Pan Am aircraft, 317 passengers and nine crew died, leaving only 61 survivors, most of whom who were sat towards the front of the aircraft. Passengers escaped the burning aircraft onto the wing, before leaping to the ground and reaching safety.

The final report concluded that the direct cause of the accident was the KLM captain taking off without clearance to do so.

However, it was recognized that there were a string of coincidental factors and, in the absence of just one of those elements, the accident might not have occurred.

The decision by the crew of the KLM 747 to refuel added extra weight and increased the take-off distance required to get airborne. There was also the time taken to refuel, during which the weather deteriorated. It was later determined that the aircraft had enough fuel to reach Gran Canaria and return to Amsterdam without the need for any extra fuel.

In addition, the controller and the Pan Am crew speaking over the radio at the same time, both with critical information, cancelled out the transmissions to the KLM crew.

Following the disaster, changes were made within the industry enforcing the use of a standard, concise and unambiguous language to improve safety. A radio call from the KLM co-pilot saying “we’re at take-off” and the reply from the tower controller saying “OK” were both misinterpreted by the receivers of the messages with disastrous consequences.

All clearances and instructions given by Air Traffic Control now require a read-back from the flight crew, to ensure messages have been received and understood in full.

On this day: The maiden flight of the de Havilland Comet

On this day in history, the first flight of the Comet, the world’s first jet airliner, took place, leadi...

On the morning of July 25, 1909, Louis Blériot departed Calais in his XI model aircraft in an attempt to be first...

A brief history of long-haul flights

From 21 miles to 10,000: In his latest column for AeroTime, Alec Wignall takes a look at the history of long-haul aviati...

Passenger with no flying experience lands aircraft after pilot incapacitated

Thank you for subscribing!
Please check your email and confirm subscription.